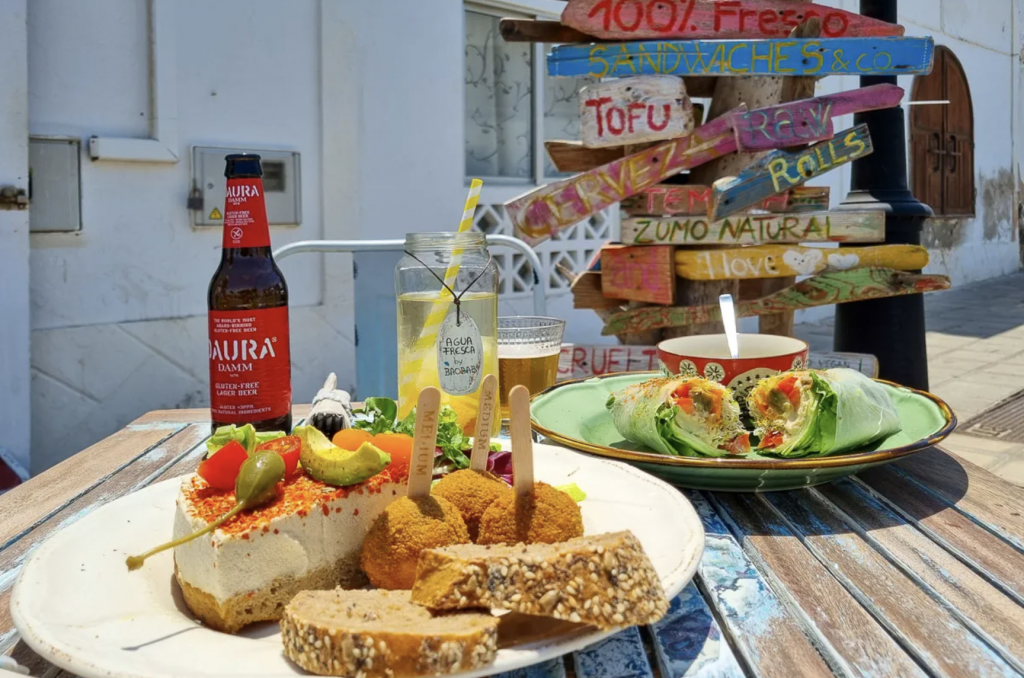 The flavors of the island of Fuerteventura are represented by its simplicity and the origin of a poor cuisine.

Meat, pescado (fresh fish), papas of all kinds (potatoes) and much more attract the tourists' palates from all over the world.

As a tradition, "paella" remains the culinary symbol of all of Spain which, however, can vary in ingredients depending on the areas concerned.

A dish that with its flavors, a mix of vegetables, fish, meat and rice, embodies the Spanish philosophy that embraces multitudes of different races and cultures within its borders.

However, “Paella” is not the only typical dish from Spain and, in this case, from Fuerteventura;

potatoes, stewed meats, local cheeses and grilled fish of the place are the basis of the culinary tradition of the Majorero and Canarian people.

What are the typical dishes of the island?

Before listing the 10 best restaurants in Fuerteventura, it is more than appropriate to know which are the main courses that cannot be missing on the table.

Canarian goat stew is a typical peasant dish where, thanks to the addition of wine and spices, a soft and round flavor is obtained.

The most authentic versions are eaten in the trattorias of the inland villages, and often also contain particular cuts such as liver and heart.

Goat meat must be well treated to mitigate its very strong wild flavor, but in the Canaries in the form of stew it takes on a tasty flavor.

Sancocho means "boiled" and is a stew generally made with salted sama, a local fish similar to grouper.

Potatoes, onion, and batata (a sweet tuber) are added to the fish and a soupy and tasty stew is obtained which is accompanied by mojo and the traditional gofio, a kind of soft "polenta" made with cereal flour.

This is the most famous dish of the Canaries, it can be enjoyed as an appetizer, or as a side dish to main courses.

This poor recipe consists of small round potatoes typical of the Canaries that are cooked in their skins and then served in a crock accompanied by two types of mojo, the red one (which is slightly spicy and is made with garlic, red peppers, red peppers, spices and oil) and the green one (made with coriander, green pepper and garlic).

Without a doubt, goat cheese is the most famous and exported product.

It is called "majorero di Fuerteventura" proving that it is an authentic local product, originating from the island and supported by the designation of origin since 1996.

There are many different maturations versions, sweet, spicy and smoked.

This simple spoon dessert was imported into all the Canary Islands from Portugal and has become customary in Fuerteventura.

It is a cream made with fresh eggs, sugar syrup and cinnamon that is served in many restaurants after a meal.

A typical dessert of Fuerteventura and all the Canaries.

It consists of a chocolate mousse without cream and prepared with the use of wine. 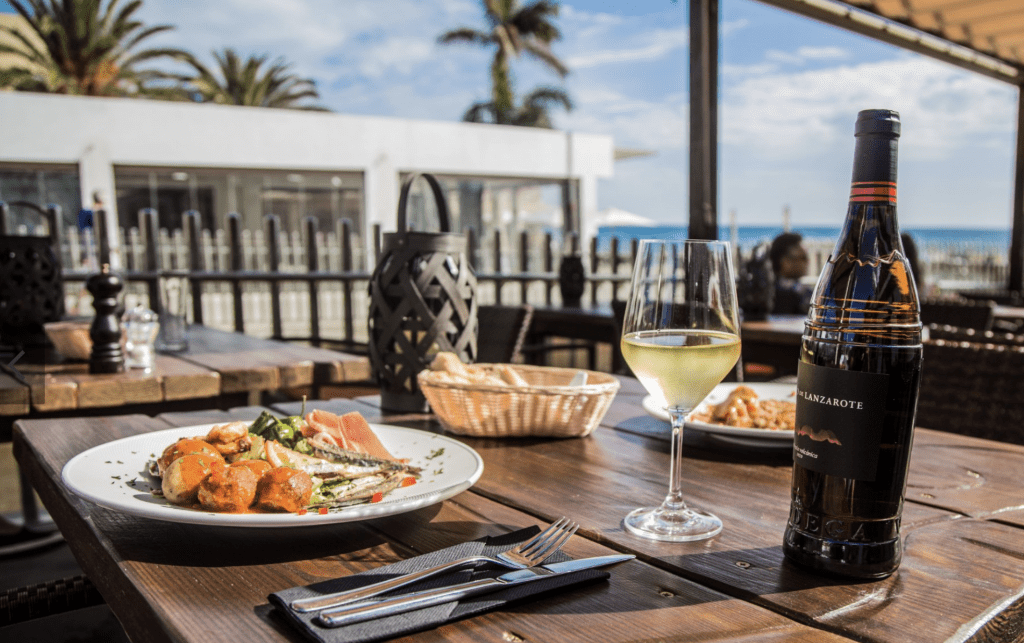 Located in the ancient port of El Cotillo, at La Vaca Azul you will be able to enjoy a wide range of specialties, from fresh fish to risottos, salads and of course homemade desserts.

The restaurant has a large terrace overlooking the sea, which will make the meal even more memorable.

The kindness and hospitality of the staff is very helpful as well as the owner of the restaurant, who always recommends an excellent grilled fresh fish of the day.

The prices are high compared to the island standard, but more than deserved. 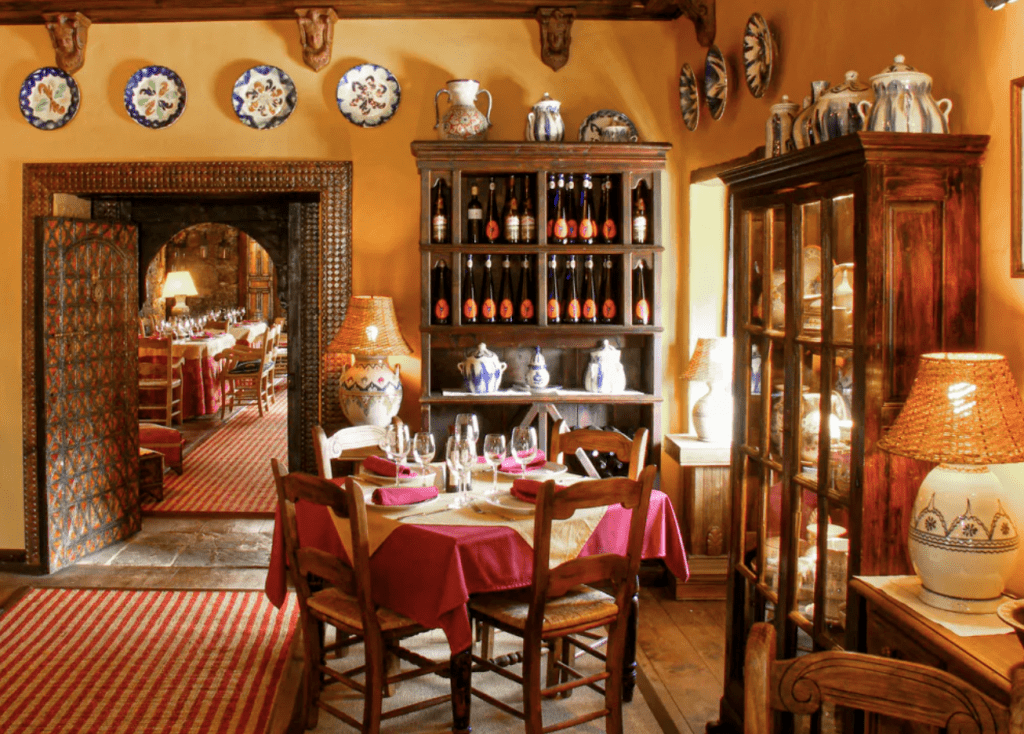 This restaurant located in the heart of Betancuria, worth a visit just for the location, just think that it is a renovated 17th century farmhouse by the German designer and photographer Reiner Loos.

The interiors of the restaurant are nothing short of picturesque and furnished in every detail and, on the hottest days, it is possible to take advantage of the large garden, which is also very well-kept.

The main dish is undoubtedly the “cabrito”, but for vegetarians there is also a wide range of vegan options available.

Very attentive and fast staff, prices above the island average but well deserved. 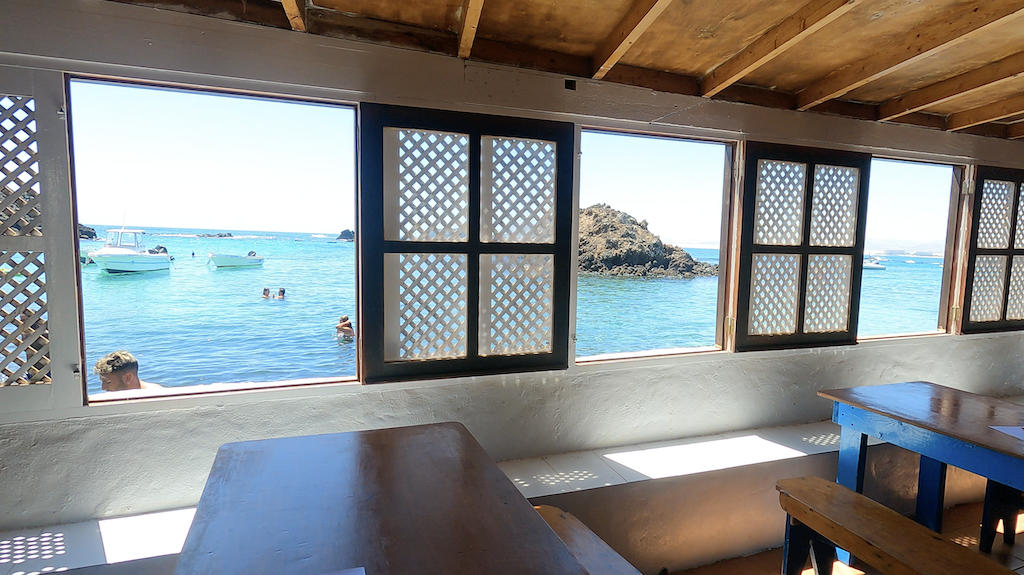 This simple but cozy restaurant is located on the island of Lobos, just a few minutes from Corralejo.

Given its proximity to Fuerteventura, it therefore deserves to be taken into consideration regardless of the visit to the island of Lobos.

The restaurant is very spartan but with a breathtaking sea view and very low prices.

Being the only restaurant on the island, reservations are required, which can be made either by phone or on site if you arrive early in the morning with the launch.

Located in the main square of Corralejo, it is definitely one of the best Tapas restaurants in Corralejo.

It includes the € 30.00 formula for two with a mixed Tapas tour of the house. 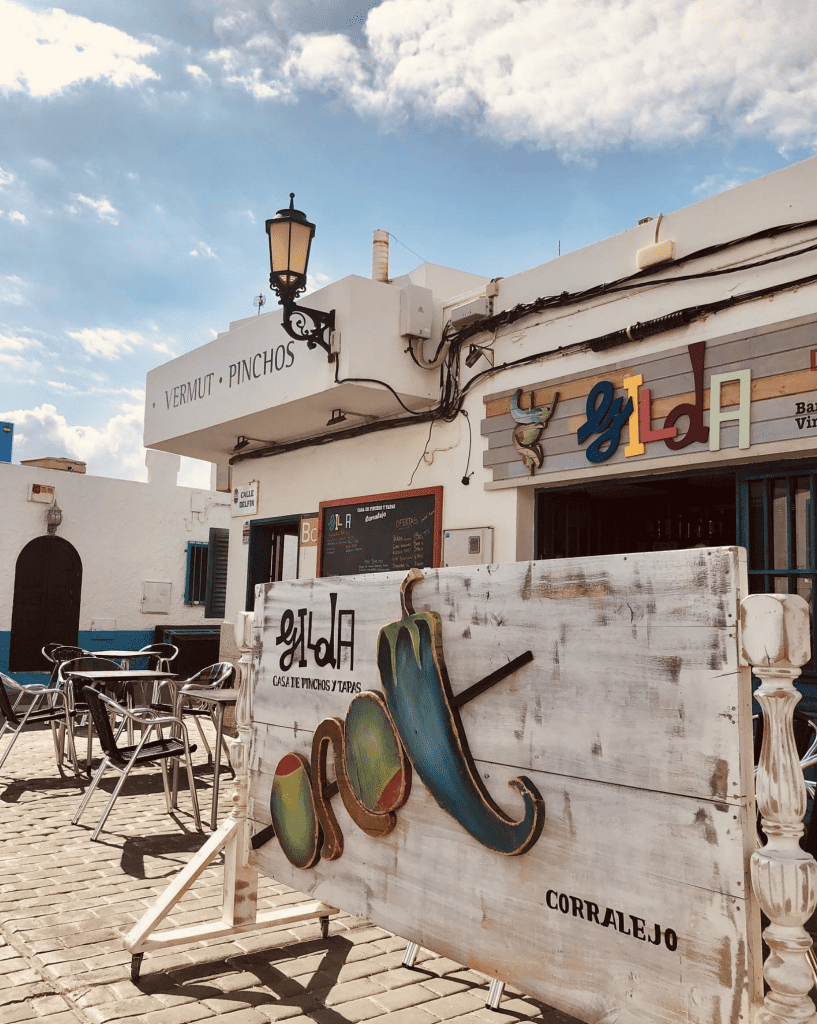 From lunch to dinner, passing through the aperitif, Gilda is the right place for 'tapear' facing the sea.

Youthful and welcoming, the restaurant has few tables and seats at the counter, to create an intimate atmosphere among friends.

Mainly tapas, as well as small portions to share, for all tastes:

The small and nice restaurant offers typical island dishes at a reasonable price. 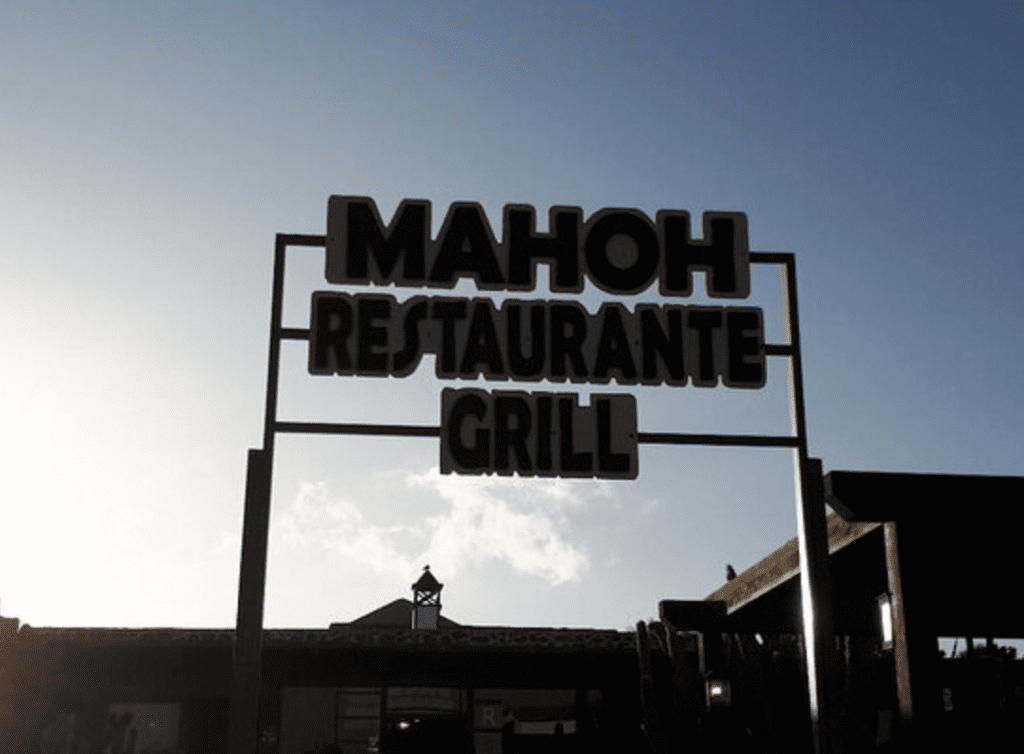 If you want to eat in an old Majorera farmhouse, the Mahoh restaurant in Villaverde, near Las Palmas is ideal!

Their cuisine is a search for gastronomic sensations, without forgetting the roots of Majorera.

You can taste the most typical traditional dishes of the island or discover new flavors based on the best products of the earth.

The prices are average and the service very polite, smiling and friendly. 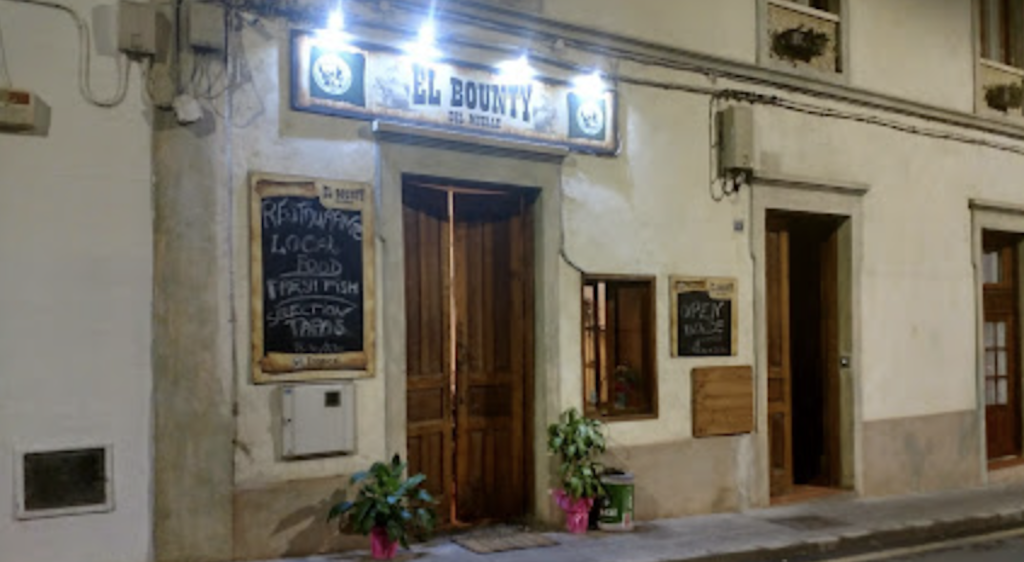 a small and easy-going place, with painted walls, a few steps from the sea, and a very kind Italian manager who has moved to Fuerteventura for many years.

This place offers cheesecake, a dessert known all over the world, in a Spanish version:

In another small fishing village in the south of Fuerteventura, there is a nice restaurant where you can taste excellent fish, cheeses and vegetables cooked in the typical ways of the island.

La Falúa, however, is a refined restaurant, suitable for spending a more elegant evening.

Prices are slightly above average. 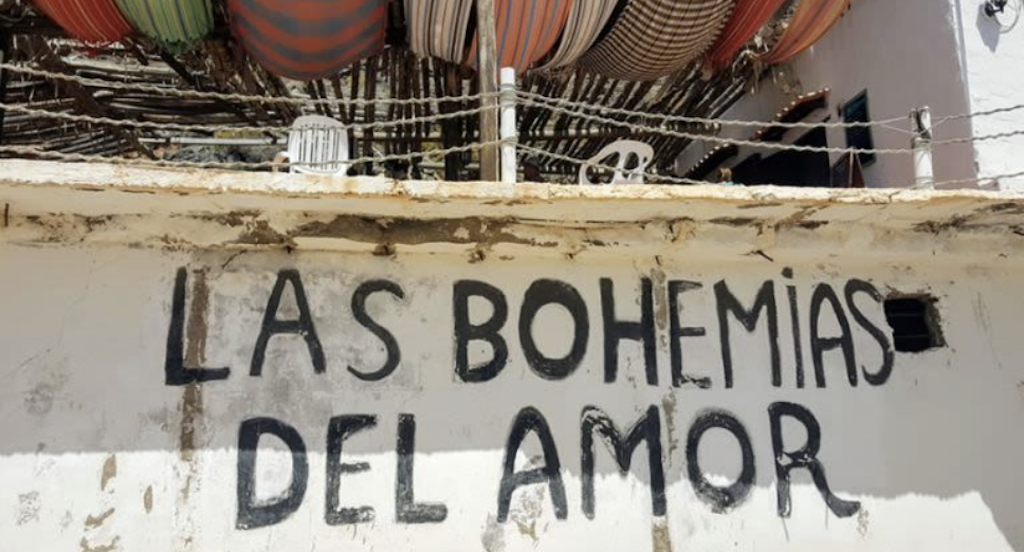 In Puertito De Los Molinos, it is ideal to stop for lunch and watch the sunset from Las Bohemas De L'amour, a restaurant set up in a hippie style with hammocks hanging from the ceiling where you can taste Tapas and cerveza.

The “Spanish tortilla” and the “Galician pulpo” are very popular. 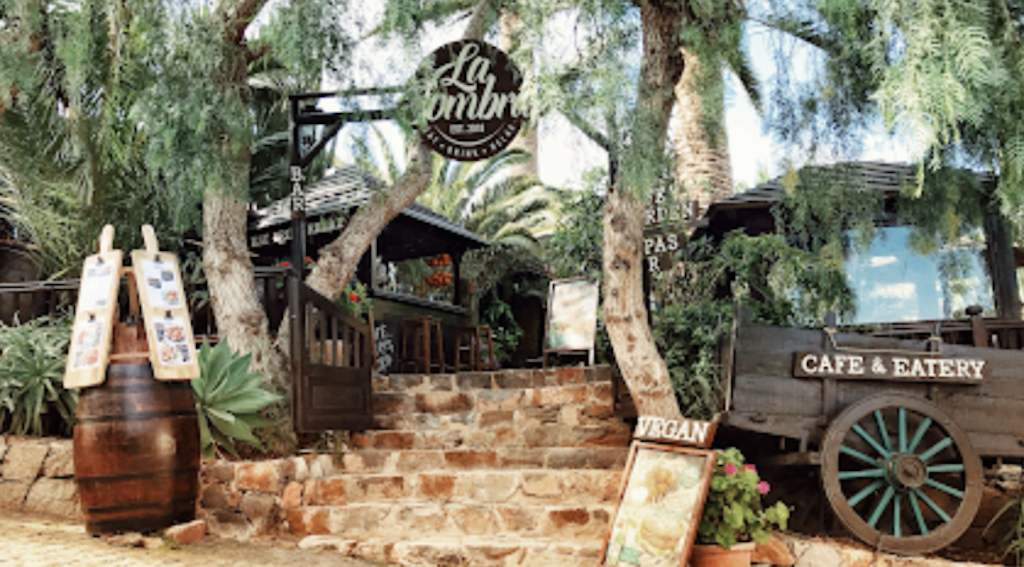 Betancuria, in the heart of Fuerteventura, perched on the mountains, is a pretty mountain village considered one of the most beautiful villages in Spain.

The place is really nice, surrounded by trees and vegetation and it will almost seem like you are not in the deserted and wild Fuerteventura.

The local specialty is kid, but the restaurant also offers vegetarian cuisine.

If you are interested in having more information on restaurants in Fuerteventura and on the services offered, the Cofete Coworking staff will respond to your requests.